Religious Beliefs Don’t Give Us Freedom to Discriminate 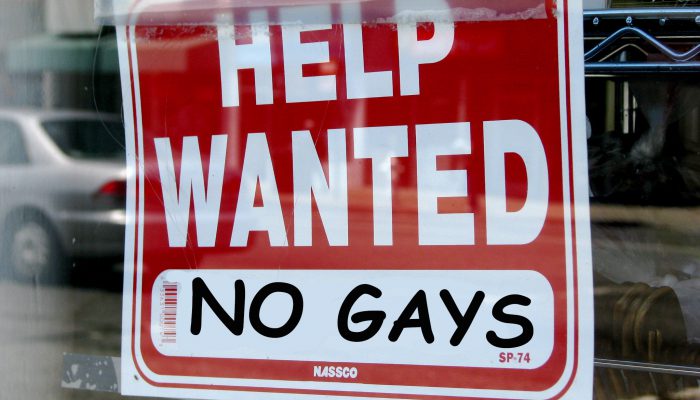 For those who have never heard of Rachel Held Evans, I want to introduce her to you. In May of this year, at age 37, she died from severe swelling of the brain brought on by an allergic reaction to medication she was taking for an infection. She left behind a husband and two children — a boy age three and a girl just under a year old.

She also left behind millions of us who admired her and were inspired by her grace and courage.

I followed her writings on Twitter and simply loved the things she wrote. She was a Christian who struggled honestly with the questions of faith. She wrote four books about her faith, especially encouraging others who struggled with making sense of God, the Bible and living the Christian faith.

She always wrote about God’s grace, and was courageous in doing so. She challenged those who gave simplistic answers to life’s complex questions. I’ll share just a couple of quotes that especially resonated with me:

“It’s a frightful thing – thinking you have to get God right in order to get God to love you, thinking you’re always one error away from damnation. … The very condition of humanity is to be wrong about God. The moment we figure God out, God ceases to be God. Maybe it’s time to embrace the mystery and let ourselves off the hook.”

“I’ve come to regard with some suspicion those who claim that the Bible never troubles them. I can only assume this means they haven’t actually read it.”

I encourage you to buy her books, read her blog, Google her, and learn about her. Your life will be blessed as her writings challenge — and expand — your own understanding of God and God’s purposes for you.

Remembering Rachel brings to my mind Charles Perry, the Texas state senator from my area, who recently sponsored Senate Bill 17. I call his proposed law “the permission to hate in the name of Jesus” bill. If this bill were to pass, it would allow people serving the public to refuse service to people whose lives or beliefs conflict with their own “sincerely held religious beliefs.” Of course, what Senator Perry aims to do, in proposing this bill, is to give people the right to discriminate against gay people, or Muslims, or … well, you get the idea. If you don’t like the way someone chooses to live their lives or the way they think, it’s okay to disrespect them and refuse to serve them. Personally, I can’t imagine Jesus being pleased. Seems to me Jesus didn’t treat people this way.

Rachel wrote: “I thought God wanted to use me to show gay people how to be straight. Instead, God used gay people to show me how to be Christian.” Same thing has happened to me. I finally figured out what Dr. Tracy tried to teach me at Howard Payne University years ago — that the love of God is unconditional and that my role as a follower of Christ is to love people, not judge them.

Maybe you disagree with Rachel and me. The First Amendment to the U.S. Constitution gives you the right to believe as you see fit, but it does not give you the right to discriminate against those who disagree with you. You need to learn the difference between acceptance and approval. You don’t have to approve of the way that others use their freedom in living out their faith and their lives, but you do have to accept their right to do so. It’s the American way.

My great-grandfather, Robert Morrison Currie, came to Texas from Mississippi in 1857 and founded the First Baptist Church of La Feria, Texas. Knowing the time and culture into which he was born, I can imagine he might have had the “sincerely held religious belief” that a white man could own a black man and I can imagine that he quoted Ephesians 6:5 to support his religious belief: “Slaves, obey your earthly masters with respect and fear, and with the sincerity of heart, just as you would obey Christ.”

During the Civil Rights movement of the 1960s, there were plenty of people who did not want to serve African-Americans in their restaurants, hotels, or other places of business because of their “sincerely held religious belief” that white people were superior to black people. Sadly, that appears to be the “sincerely held religious belief” of millions in America today who are encouraged by our president and his statements in support of white supremacy and racism.

What most bothers me about Senator Perry’s bill is his statement about how the Bible doesn’t need interpreting … that it speaks for itself. That just blew my mind, but it is typical of the thinking of Religious Right fundamentalists.

Take, for example, Psalm 137:9 (NIV): “Happy is the one who seizes your infants and dashes them against the rocks.” I kind of think that verse (and a few thousand more) might need some interpretation.

Every year we celebrate July 4. It is the time to reflect on the forming of this great nation and the principles of our Founding Fathers. I always stress the First Amendment, because I believe religious liberty is the most important principle in American life. If we would live by the First Amendment, we might actually have some unity and respect in this country.

The greatest words ever inscribed into law by any country are the first 16 words of the First Amendment: “Congress shall make no law respecting an establishment of religion, or prohibiting the free exercise thereof.”

But I am very concerned that many Christian leaders — for example, Franklin Graham, Robert Jeffress, and Jerry Falwell, Jr.—and political leaders — for example, President Trump, Gov. Abbott, Senator Ted Cruz, Lt. Governor Dan Patrick, and State Senator Charles Perry—are working to redefine religious liberty as the right of Christians to be mean and hateful in the name of Jesus.

That is not the meaning of the First Amendment, which guarantees all people in America — not just Christians — the freedom to worship (or not) freely without interference. It does not guarantee them the right to use their “sincerely held religious beliefs” as an excuse for racist and bigoted — or downright evil — actions toward others.

Friends, you can believe anything you want in America, and the Constitution protects your right to believe it. That protection is for all people of all faiths or of no faith at all. Your right to live out your faith is protected, but the “free exercise thereof” does not mean you can act in ways that are mean, hateful and wrong. People in America have a right to live by their own value system as long as they don’t hurt others. That is freedom.

In 1791, Baptist preacher John Leland defined religious liberty as well as it will ever be defined: “Let every man speak freely without fear — maintain the principles he believes — worship according to his own faith, either one God, three Gods, no God or 20 Gods; and let the government protect him in so doing.” America was founded on this very sentiment.

Respect the First Amendment, and you will find we can be a unified country once again. It protects us from the Grahams, Jeffresses, and Falwells of the world (and the Curries of the world), as well as any extremist believers of any faith. That was the wisdom of our Founding Fathers. Let’s not set that wisdom aside by forcing our religion on others.

Remember Rachel Held Evans, and live your life with grace and courage.

— David R. Currie, Ph.D., is chair of the Tom Green County Democratic Party.He has a Ph.D. in Christian Ethics, serves on the board of Pastors for Texas Children and The Interfaith Alliance in Washington D.C., and also ranches and teaches Sunday school. A version of this essay was first published in the San Angelo Standard-Times on September 11, 2019, and is used with permission of the author.