Walter B. Shurden’s Articles About the Writings of John R. Claypool 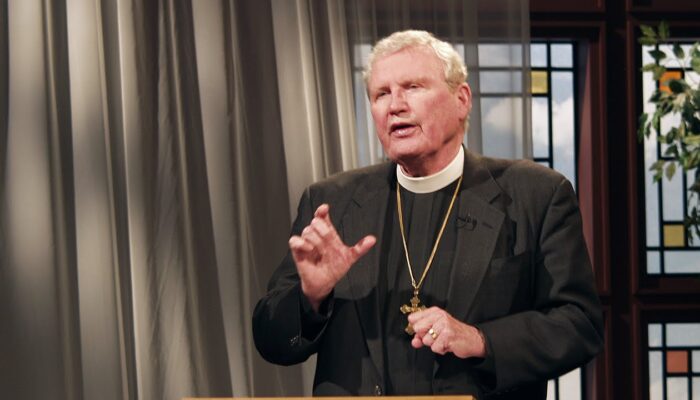 Years ago, a company which aired frequent television commercials was the investment firm, E.F. Hutton. The setting was usually in a noisy, crowded restaurant or other public place which would suddenly become quiet and everyone in the place leaned in to hear what one person was quietly saying to another person. A deep and majestic voice then intoned, “When E.F. Hutton talks, people listen,” implying that if one wishes to know about finances, Hutton was the person to listen to.

For me, when it comes to preaching, Walter B. (Buddy) Shurden carries the equivalent authority depicted in the commercial. He is a connoisseur of preaching and when he says someone is the best, or among the best preachers in the South, I take that very seriously, listening closely to what Shurden has to say.

So, two statements found in the essays that follow in this special edition of Christian Ethics Today cause me to perk up and pay close attention. First, Shurden writes:

“In my judgment, the two most prominent and popular preacher/theologians among white, progressive Baptists of the South in the last half of the 20th century were Carlyle Marney and John R. Claypool.”

Then, in a subsequent essay, he writes:

“One of the best white Baptist preachers and teachers of preachers in the South of our generation is Clyde E. Fant.”

I can vouch for the Shurden’s judgment regarding Marney and Fant. As a student at Furman University, I was fortunate to hear Marney several times in large preaching settings and small group conversations while he was a pastor in nearby Charlotte, NC. He was magnificent, inciteful, funny, challenging. Fant was my professor of preaching in seminary and my favorite preacher, my role model for what good preaching is. He is unique, blessed with the ability to take a passage from the Bible and make it live in one’s mind and heart. I never missed his sermons in chapel (although I was not a very faithful attendee in chapel generally.)

But I never heard John Claypool. Looking back, it is astounding to me that my exposure to Claypool’s preaching amounted to zero, zilch. My education was sadly neglected as a result.

Therefore, when Buddy Shurden offered to write a six-part survey of Claypool’s life and work, I told him that although I would gladly publish anything he writes, I was especially eager to learn from him about Claypool.

What follows in this special edition of Christian Ethics Today is the six articles Buddy wrote for the journal collected in a single volume. The occasion for this special publication is an event organized and planned by Claypool’s son, Rowan Claypool, and held in Louisville, September,
16-18, 2022 called GLAD REUNION: CELEBRATING THE MINISTRY AND LEGACY OF JOHN R. CLAYPOOL.

Attendees will be introduced to a new book, CLAYPOOL, edited by Douglas Weaver and Aaron Weaver, published by Mercer University Press. As an addendum to this special issue of the journal, that book is reviewed by another connoisseur of preaching, William Tuck.

For readers who already have deep understanding and appreciation for Claypool’s life and ministry, I hope this volume contributes to your affection and respect for him. For others, like me, who know the name and reputation of John R. Claypool but do not have the long-standing awareness and appreciation of his life and work, may we be blessed, informed and inspired to know the man better.