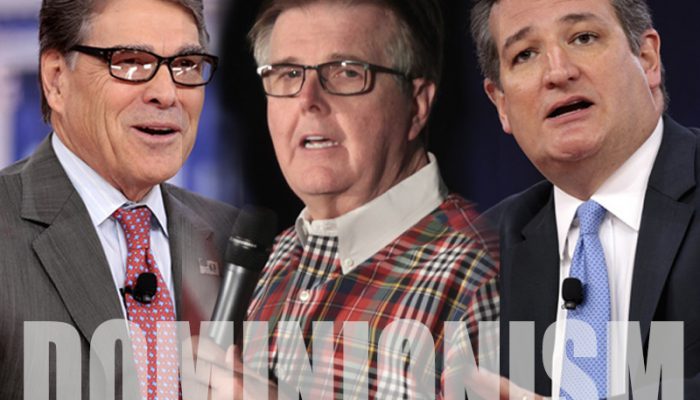 Though it’s seldom mentioned by name, it’s one of the major forces in Texas politics today: dominion theology, or dominionism. What began as a fringe evangelical sect in the 1970s has seen its influence mushroom — so much so that sociologist Sara Diamond has called dominionism “the central unifying ideology for the Christian Right.” That’s especially true here in Texas, where dominionist beliefs have, over the last decade, become part and parcel of right-wing politics at the highest levels of government.

So, what is it? Dominionism fundamentally opposes America’s venerable tradition of church-state separation. In fact, dominionists deny that the founders ever intended that separation in the first place. According to Frederick Clarkson, senior fellow for religious liberty at the non-profit social justice think tank, Political Research Associates, dominionists believe that Christians “have a biblical mandate to control all earthly institutions — including government — until the second coming of Jesus.” And that should worry all Texans — Christians and non-Christians alike.

Dominionism comes in “soft” and “hard” varieties. “Hard” dominionism (sometimes called Christian Reconstructionism), as Clarkson describes it, explicitly seeks to replace secular government, and the U.S. Constitution, with a system based on Old Testament law.

The father of hard dominionism, the late Presbyterian theologian, R.J. Rushdoony, called for his followers to “take back government … and put it in the hands of Christians.”

Rushdoony’s legacy has been carried on by his son-in-law, Tyler-based economist Gary North, an unapologetic theocrat who in 1982 called for Christians to “get busy in constructing a Bible-based social, political, and religious order which finally denies the religious liberty of the enemies of God.” (North, founder of the Institute for Christian Economics, did not respond to my request for comment.)

Perhaps the most powerful dominionist in Texas politics is Lieutenant Governor Dan Patrick.  Patrick said that elected officials must look to Scripture when they make policy “because every problem we have in America has a solution in the Bible.”

Mainstream Texas political figures don’t go quite that far. Instead they trade in “soft” dominionism. While soft dominionists do not advocate replacing the Constitution with biblical law, they do believe that Christians need to regain the control over political and cultural institutions that they (supposedly) lost after the founding period.

Top Texas political figures have had links to dominionism for years. In 2011, the Observer covered then-Governor Rick Perry’s ties to a branch of the movement, the New Apostolic Reformation. Since then, the relationship between dominionism and right-wing politics has become even cozier.

Case in point: Ted Cruz. Although Cruz is too politically savvy to openly endorse dominionism, key figures on his team are explicit dominionists.

The most important may be his father, evangelist Rafael Cruz, a frequent surrogate for Cruz on the political stage.

Cruz’s père espouses Seven Mountains Dominionism, which holds that Christians must take control of seven “mountains,” or areas of life: family, religion, education, media, entertainment, business and government. Speaking at the Texas GOP Convention in Dallas in May, Rafael Cruz claimed that God inspired the founders to produce the Constitution, and declared that “biblical values” have made America the greatest country on earth. He encouraged Christian pastors to run for public office at every level, and called upon all Christians to exercise their “sacred responsibility” to vote for candidates who uphold biblical values.

As for what Thomas Jefferson famously called America’s “wall of separation between Church and State,” Cruz claimed in a 2016 sermon that it was meant to be a “one-way wall” — preventing government from interfering in religion but allowing the Church to exercise dominion over government. (I have to wonder whether a “one-way wall” is really a wall at all.…)

Another Seven Mountains Dominionist active in Cruz’s failed presidential bid was David Barton, who managed one of Cruz’s super PACs. On a 2011 radio program, Barton said that Christians need to “be able to influence and control” the “mountains” in order to “establish God’s kingdom.” An amateur historian, outspoken Christian Americanist, and long-time Texas GOP activist, Barton runs WallBuilders, an Aledo group that seeks to “exert a direct and positive influence in government” and to assist public officials in developing “policies which reflect Biblical values.” (Barton also played a key role in incorporating Christian Americanism into the Texas curriculum standards.)

Perhaps the most powerful dominionist in Texas politics is Lieutenant Governor Dan Patrick. In a 2012 sermon and again at the 2015 Texas Tribune Festival, he said that the United States was founded on the Bible. Patrick has also made it clear he believes the Bible should determine public policy. In 2014, Patrick said that elected officials must look to Scripture when they make policy, “because every problem we have in America has a solution in the Bible.” (Where the Bible addresses problems like greenhouse gas emissions or cybersecurity, I’m at a loss to explain, even with 20 years of biblical study behind me.) His call for a “biblically-based” policy mindset “doesn’t mean we want a theocracy,” he insisted. “But it does mean we can’t walk away from what we believe.”

For Patrick, not “walking away” seems to mean basing policy on his own religious beliefs — as he showed when he opposed same-sex marriage on biblical grounds. (Patrick also did not respond to my request for comment.)

Another dominionist active in Texas politics is conservative firebrand-slash-medical-doctor Steven Hotze. Hotze is linked to Gary DeMar, a dominionist writer and lecturer. DeMar has called for the United States to be governed by Old Testament law, including instituting the death penalty for gay/lesbian sex. As recently as 2013, Hotze was an officer of DeMar’s dominionist think tank, American Vision; its mission is “to restore America to its biblical foundation.”

Hotze also heads the influential (and hate-group certified) Conservative Republicans of Texas (CRT). In a promotional video, Hotze explains that CRT “is committed to electing Republicans” who will “defend the constitutional liberties that arose from the Christian heritage of our Founding Fathers.” (Hotze did not respond to my requests for comment.)

Government officials have a duty to uphold the Constitution, not to enact their personal religious convictions. They are obliged to serve all of the people, not just members of the officials’ own religious community.

The dominionist goal of having Christianity shape law and policy amounts to the very governmental establishment of religion that the First Amendment explicitly prohibits. It would also appear to violate the Texas Bill of Rights, which states that “no preference shall ever be given by law to any religious society or mode of worship.”

Of course, dominionists insist that none of this matters, because the founders intended to create a “Christian nation.”

Even if some of the founders did mean for Christianity to be normative for law and policy, the question today is: Which Christianity? Christians disagree sharply on a whole host of issues, and dominionists simply don’t speak for many Texas Christians. For example, Hotze’s CRT supports capital punishment and wants to eliminate entitlement programs, and would deny marriage to same-sex couples, while Patrick would deny Texans reproductive choice and transgender people access to appropriate public restrooms. Those positions directly oppose the gospel as many Christians, myself included, understand it. And in seeking to make law and policy conform to the Bible, dominionists don’t speak for the growing number of non-Christians and religious “nones” — those who are religiously unaffiliated, including atheists and agnostics.

To be clear, I’m not saying that religion has no place in the public square. Far from it. Religious persons have just as much right as anyone else to advocate laws and policies that line up with their beliefs and values. Government officials, however, are in a different position. No, they don’t have to “walk away from what they believe,” as Patrick puts it. Their religious beliefs can inform their personal morality in office — don’t lie, don’t steal, and so on — and give them comfort and hope or motivate them to serve others. But they can’t make policy based on those beliefs. Government officials have a duty to uphold the Constitution, not to enact their personal religious convictions. They are obliged to serve all the people, not just members of the officials’ own religious community.

Ironically, for all their talk about what those founders intended, it seems that dominionists have failed to heed the wisdom of two of the most prominent, Thomas Jefferson and James Madison. Madison warned that when government prefers one religion over others, religion suffers. A government that can make Christianity the official religion, he observed, can just as easily prefer one form of Christianity over others — for instance, Catholicism over evangelicalism.

For his part, Jefferson appealed to history. Whenever government officials “have assumed dominion over the faith of others, setting up their own opinions and modes of thinking as the only true and infallible” (my emphasis), he wrote, they have ended up creating “false religions.”

Christians who seek political domination would do well to heed those wise words.

— David R. Brockman, Ph.D., a religious studies scholar and Christian theologian, is a nonresident scholar in the Religion and Public Policy Program at Rice University’s Baker Institute. He also teaches at Brite Divinity School, Southern Methodist University and Texas Christian University. He is the author of Dialectical Democracy through Christian Thought: Individualism, Relationalism, and American Politics. This essay was first published on June 2, 2016 by The Texas Observer and is reprinted here with permission from The Texas Observer.